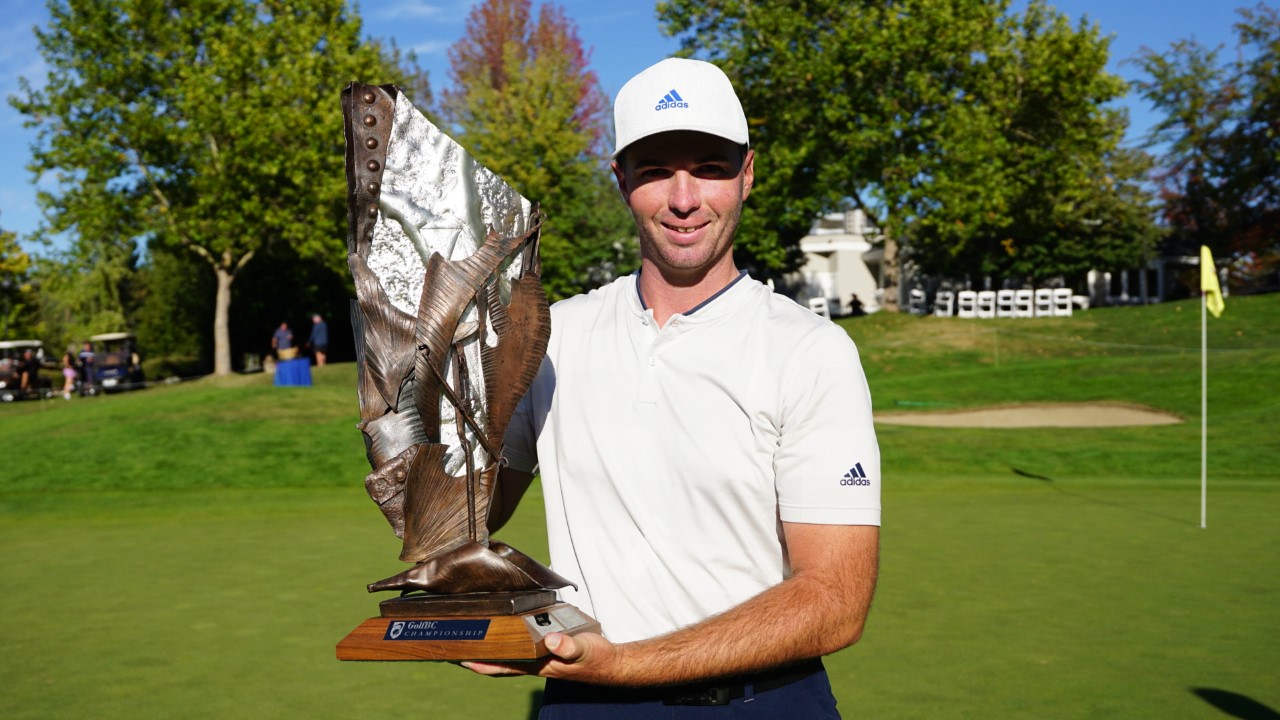 Davison wins the GolfBC Championship for second title of the season

After beginning the day at Gallagher’s Canyon Golf Club with a one-shot lead, the Duncan, British Columbia, native shot his third 3-under round of 68 of the tournament to take home the hardware in his home province.

“I never played very aggressive,” said Davison. “I made a sloppy bogey after hitting driver on No. 10. That kind of kicked me in the butt and [I said to myself] I can’t glide in; I’ve got to get after it. So, I made two birdies after that and that kind of got the round going.”

Davison also won the Brudenell River Classic on Prince Edward Island and takes a commanding lead in the points standings heading into the final event of the season, next week’s Reliance Properties DC Bank Open Presented by Times Colonist at Uplands Golf Club in Victoria. Davison has amassed 1164.19 points. Amateur Noah Steele dropped into second (9926.25), while Leonard moved into third, with 910.89. The only player still in the hunt for the Points List title is Michael Blair of Ancaster, Ontario (732.58)

“It’s funny because if you told me I was going to win one tournament on this Tour, it would be Uplands,” said Davison. “I used to play there every week when I was home, so I’m comfortable on that track. Some friends and family are going to come out next week. I’m just looking to have another good week, put myself in contention and see what happens”

Delta, British Columbia’s, Yi Cao also shot a 68 in the final round, including five birdies, to claim second place.

“The way I was striking the ball, I felt like nobody could really stop me,” said Cao. “The only thing was, I kind of let myself down with my putter. Without the few missed putts, I was thinking about 15- or 16-under. That was the number I was thinking I would post today.”

Brendan Leonard of Cambridge, Ontario finished in third place, at 11-under, while Vancouver’s Ilirian Zalli and Ty Campbell, of Saskatoon, finished at 10-under, tied for fourth.

“It’s so nice that my hard work this offseason is paying off. It just shows that if I can get it in the fairway, the rest of my game is there.” –Callum Davison

“I was three years old when I started. I picked it up that way. I feel like there are so many ways of playing golf. I’ve had two or three coaches try to change me, and I’ve always thought that I can play this way. I don’t need to switch. You look at Jim Furyk, Matthew Wolfe, there are so many guys. You can make it happen.” –Callum Davison on being the only player on the Mackenzie Tour – PGA TOUR Canada using a cross-handed swing for full shots

“It’s actually given me great confidence for Uplands Golf Club. I’m going to go home and have a little bit of rest, work on my game a little bit and hopefully I get to lift the trophy next week.” –Yi Cao on his second-place finish